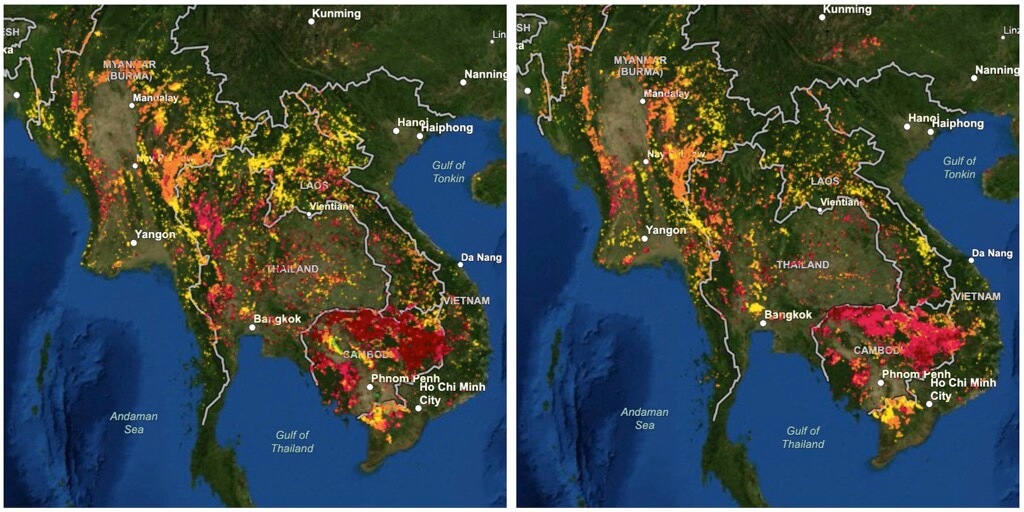 Climate change, population growth, and economic development are leading to increase in both man-made and natural disasters.  Wildland fires and open burning are factors to create carbon-related greenhouse gases concentration in the atmosphere. The resulting consequences will lead to impacts to public health, economic growth, and ecosystem.

From the past 17 years of data (2003-2019) during a fire season of mainland Southeast Asia (Upper ASEAN) begins from January to April, it released less carbon and carbon dioxide from fires in the past couple of years where the peak emission was generally in March.  This recent past fire season, 2019, carbon emission was a bit higher than in 2018, but still less than 16 years average (Figure 2).

For Thailand, in March 2019, carbon emission from active fires was not above the average 16 years (2003-2018), but the second half of April values were right at the average. Cambodia burned the most and more in January 2019 than 2018. A burning pattern changed in February where Lao PDR showed more fire activities. Then in March, Lao PDR burned the most and throughout the country.  Later in April, Myanmar picked up its burning activity and burned more.  For the whole Upper ASEAN, there was more carbon emission from fires in 2019 than in 2018.

For northern Thailand where main fires occur, there were a couple of intensive methods in place which are a 60-days no burning period, a registration before entering the forest, enforcement of laws and regulations, intensive public relation and campaign.   The fire emissions monitoring effort has been carried out for the past 4 fire seasons supporting by Dr. Mark Parrington (@m_parrington) from CAMS-ECMWF.  Hopefully through a cooperation with Webster University Thailand, by next fire season 2020, a daily fire emission monitoring by province will be publicly in placed to enhance fire, smoke and haze management and control capability in Thailand and Lower Mekong Region through a short proposal named “SMOKE” project (no funding just resources utilization permission) to the European Open Science Cloud (EOSC) -hub got permitted.

In general, Upper ASEAN released less carbon emission from fires in the past couple of years as can be evidenced in Figure 1 where the peak emission is in March.  This year, 2019, carbon emission values were a bit more by country as can be seen in Figures 3 and 4 2018 and 2019 monthly comparison. 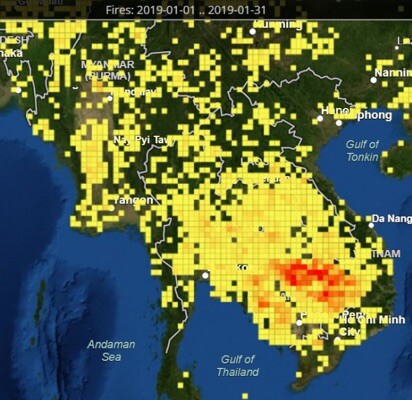 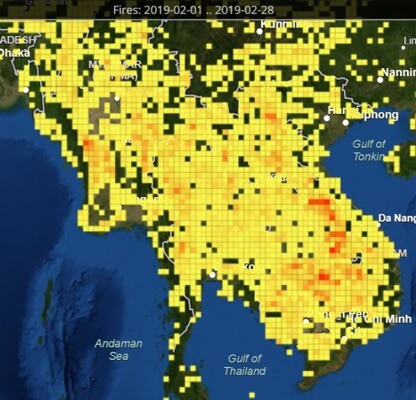 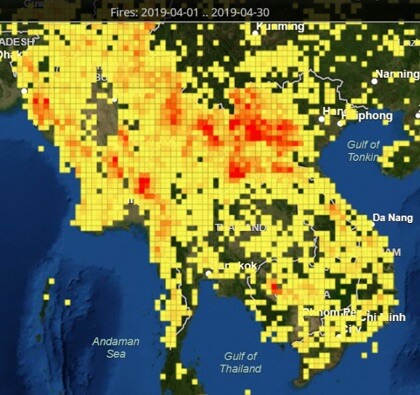 As can be evidenced in Figure 2 the carbon emission from active fires during the fire season of 2019 was higher than in 2018.  Active fires concentration in January 2019 was in Cambodia, then in February it shifted to Lao PDR, later in March it shifted to Lao PDR and Myanmar, finally in April it was back to Lao PDR again.  In general, the peak fire month of Cambodia is in January.  Lao PDR and Myanmar are in March and April where Thailand is usually in March and Vietnam is in April as can be seen in burned areas distribution in Figures 2, 3 and 4.

In 2019, Upper ASEAN, Cambodia, Myanmar, Vietnam, Lao PDR, and Thailand emitted higher than in 2018. Thailand is the only country in this region to have official forest fire control program in place; moreover, the enforcement of 60 days no burning policy (a short term solution) during fire season was practiced in the past couple of months.  This past fire season it failed as people finally started to ignite fires again.  The prohibit itself does not provide sufficient economics support to locals.  Therefore, it is more than enforcing such policy to reduce fire emissions in Thailand and the region, there are more factors of fire behaviors and fire weather involve for instance the amount of rainfall before dry season, temperature, air pressure, wind condition and direction, fuel characteristics and so on should be considered as well.  For a long term solution, a further thoroughly understanding of people’s behaviors of using fire as a daily tool is needed.  The review and study of the effectiveness of current laws and regulations are also needed in to adjust them accordingly.  If fire is still the main tool in way of life and agriculture practice in Upper ASEAN, there will be many fires ignited in this region.